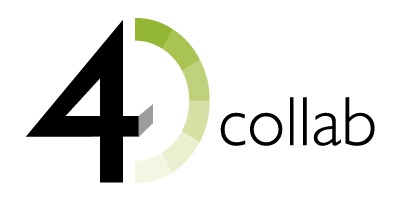 What are the expected results of 4DCollab?

The project end-product(s) and the expected results are of three different kinds: knowledge, specification of a new 4D CAD interaction system and the assessment analysis after validation of the proposed prototype.

Knowledge produced will describe and conceptualize:

• The identification of business value of the novel BIM approach for construction practitioners.
• Observations about work practices, technological usages and Human-Computer interactions in
real collaborative 4D experiment sessions.
• Innovative usages that can be imagined by business experts with both new BIM-based
working methods and natural user interfaces, thanks to creativity approach.

Specification of an interactive system will describe and conceptualize: a multi-users 4D CAD interaction system, using recent touch-based technologies, e.g. a
touch-based tabletop device, for taking into account time in the early stage of architectural
design.

This system will be prototyped.

It will be a “tangible” result, which will be potentially transferred to construction practitioners after the project. Specifications will also deal with BIM-based information system functionalities.

The assessment analysis after validation of the proposed prototype

The validation of the proposed prototype with business actors is considered an important output of the project, particularly because the proposed research is user centered and requires an “experimental” approach as well as a field approach:

As part of the project's methodology, a laboratory experiment aims to analyse professionals working on planning decision-making using 4D models and a collaboration device.

Based on the "Maison de l'Innovation" scenario, two tasks have been prepared and tested with two groups of 8 professionals late in 2017. 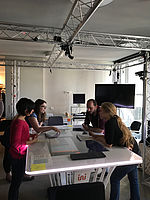 Then in May/June 2018, 16 professionals, in 4 groups of 4 users have taken part in the experimental session both in LIST (Luxembourg) and MAP-CRAI (France) premises.

Table 1: Groups and location of the experiments

Each group had to perform two tasks related to project planning, in a collaborative manner. They had to use the Shariiing software, provided by Immersion, in order to review, use and annotate the project's documents, incl. 4D models. The whole experiment sessions have been recorded by 4 cameras plus the recording of the horizontal touch-based display.They will be further analysed using encoding software for statistical analyses of interactions. Additional interviews and questionnaires enabled to get the feedback of the experimenters regarding utility and usability of the proposed system. 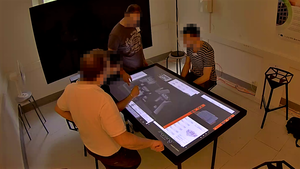 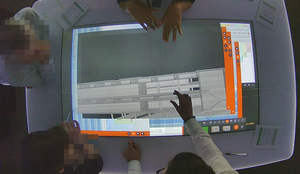 Our initial analyses demonstrate homogeneous results with regards to the time needed for performing the first task (see table) amongst the four groups. However significant differences are observed in time required to perform Task 2, especially for the groups 3 and 4, which only needed 28 and 11 minutes to achieve the task. A hypothesis to explain this, is that group 4 comprised an engineer expert in construction site planning, who probably highly influenced the decision of the group compared to the others. Further analyses will definitely try to better understand it.

As per the satisfaction of the users, we noted a high interest in the approach. Indeed, collaboratively reviewing 4D-based construction planning makes sense, and is considered as useful by the professionals. Some drawbacks related to the interaction technology have been detected, and other improvements related to the whole BIM Management workflow have been defined. These will be tackled in the next steps of the project progress.

Case study: Developing the 4D/BIM model of the Maison de l'Innovation in Belval

As an initial research case study, the team developed a 4D/BIM model of the Maison de l'Innovation in Belval.

This recent building has been fully modelled. 4D construction sequencing has been realized, linking the actual work planning to the BIM model. Documentation has been provided by Fonds Belval to stick to the real construction process. Several documents and details have been extracted to create a set of documents for the experiment. 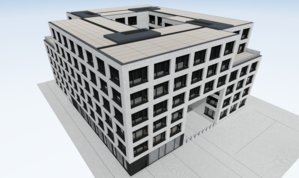 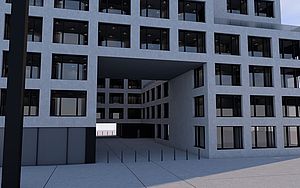 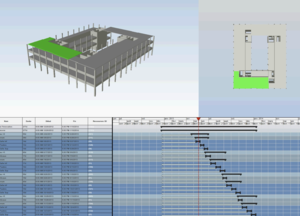